When most people think of Ancient Greece, they think of ancient Athens with its democracy and philosophers, or Sparta with its militaristic culture.1 But Greece was a much larger and more complex culture, and no where is this more evident than in the Hellenistic Period. The Hellenistic Period, covers a broad period from the death of Alexander the Great in the 4th century, to Cleopatra’s reign in the 1st century BCE.  During this period, Alexander’s conquest quickly devolved into multiple, powerful Hellenized (Greek) kingdoms that vied one another for domination.

These powerful kingdoms included, but were not limited to: 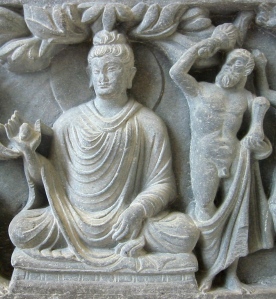 A lot of aspects that people are vaguely aware of about the ancient Greek world are often found within the Hellenistic Period, including things referenced in the Bible, the Buddhist tradition, major philosophical schools, venerable works of art, and rivals to the later Roman Empire. Eventually, the Roman Empire defeated all but the most eastern regions (who fell to the Parthians and other conquerors), but the legacy they left behind has persisted through the centuries even up until now.

I’ve been reading a lot about this period from an excellent book called From Alexander to Cleopatra: The Hellenistic World by Michael Grant. This book covers every facet of life in the Hellenistic World: history, structure, life, art, architecture, philosophy, etc.

What’s most fascinating about the Hellenistic Period is how diverse the different characters and regions of the larger Greek world were, and yet how each had distinctive Greek influence.  For example, the city-state of Syracuse, home of Archimedes, on the island of Sicily was a remote Greek colony yet it was also a great center of learning with additional influences from the Carthage and Roman culture.  On the other end of the Hellenistic world was the city of Seleucia, which was built deep in the heart of Mesopotamia had much cultural exchange particularly in the fields of mathematics and astronomy between the Greeks and the native Mesopotamian culture.  Everywhere the Greeks and their colonies went, they left their mark upon the world, but the native cultures left their marks on the Greeks as well.

The book and its contents are much too broad and complex to cover in this blog post, but it’s well worth a read, and I will likely be revisiting this topic again soon in subsequent posts covering different aspects of the Hellenistic Period.

While this period is not well known to general audiences, the Hellenistic Period represents the high-water mark of Greek culture, but also reflects a deeply cosmopolitan and dynamic period of history where changes to society and ideas were emerging, and in ways not previously seen in western culture, yet with lasting effect.

1 The myths of Sparta present a lot of problems and misconceptions. Movies like 300 are a joke, and not remotely accurate to life in actual Sparta, but that’s a rant for another day.

🎵Toss a coin to your Buddhist-Philhellenic-D&D-playing-Japanese-studying-dad-joke-telling-Trekker, O Valley of Plentyyy!🎵He/him View more posts

4 thoughts on “The Hellenistic World: Ancient Greece on a Wider Scale”

This site uses Akismet to reduce spam. Learn how your comment data is processed.